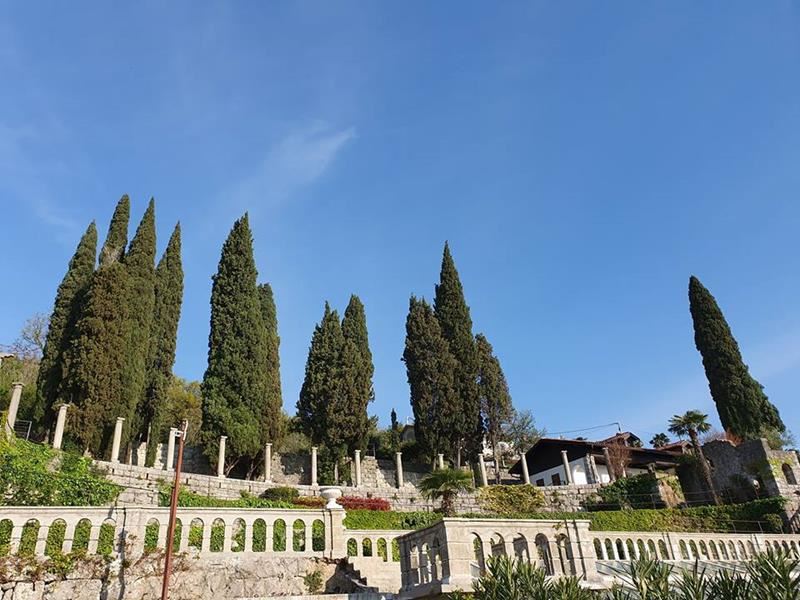 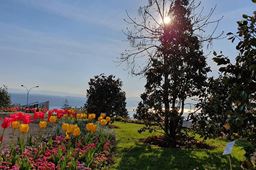 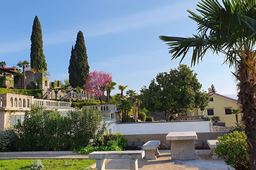 Opatija has a secret garden, a green oasis of peace in the middle of town with a stunning view of Kvarner Bay: the American Gardens.
This magnificent park, which covers an area of 8,000 m2, is located in the immediate vicinity of the town centre and Slatina Beach but is wrapped in an invisible veil of peace and tranquillity. After decades of being closed, the American Gardens have now been reopened to the public. A monumental gate with stone pillars guards the entrance to the park with its well-manicured vegetation and which has been carefully designed for relaxation of body and mind.

This paradise on Earth is located close by, so get to know Opatija's most beautiful secret.

The history of the American Gardens goes back almost a century. It all began with a 'double love story'. Michael Paulus Kuczor, a rich Hungarian Szegedi paprika merchant, came in the 1920s to Opatija, which at the time was one of Europe's most famous destinations, and fell in love with the wonderful view from the green terraces located above the town centre.

He chose this spot to make his dream come true, a dream in which an angel had appeared to him among flowers and fountains and promised him help lay out a magnificent garden.

In the vicinity, there lived Hilda von Hortenau, who was related to the Austrian imperial family, as she was an extramarital child of the Archduke Otto von Habsburg, the nephew of the Emperor Franz Joseph, and the Viennese prima ballerina Maria Schleinzer.

At the beginning of the 20th century, Hilda's mother moved to Opatija with her two children, and married the doctor Julius Cohn, who soon afterwards received the title von Hortenau.

After World War One, Hilda lived in America, and then returned to Opatija and opened a flower shop here. Hilda was the angel who helped Kuczor lay out the gardens. In 1922, this noble woman married the Hungarian adventurer, whose life's journey had taken him from his home country via Paris to America, where he started a successful spice company and earned the nickname the 'King of Paprika'.

They bought the land from Ivan Jurković-Šiša of Rijeka. Šiša had already laid out a garden on this spot and demanded from Kuczor and Hilda that they preserve a construction that he had started on the site. This structure can still be found in the botanical garden and is called Šišina Mirina by the locals.

Determined to create the most beautiful botanical garden in this part of Europe, the couple blew up the rocks on the hill with mines, brought in soil in carriages, and laid out semi-circular terrace gardens over an area of 30,000 m2.

Kuczor didn't lose his mercantile spirit in Opatija. In fact, he charged a fee of 5 lira to enter the botanical garden, which soon became famous thanks to its beautiful view of Kvarner Bay and the carefully designed architecture of the park with its gardenias, camellias, magnolias, Australian agaves and eucalypts, but also vineyards and thousands of roses. The red peppers to which Kuczor owed his fame and fortune were of course also present in the garden.
During the fifteen years (from 1926 to 1941) in which the garden was open to the public and before its founder left Opatija, a true green oasis of peace and quiet was created in the heart of the town. The press called the park 'The Gardens of Semiramis', evoking one of the Seven Wonders of the World, while locally it was known as 'the American Gardens' in reference to Kuczor's past, which is how it is called today.

If we were looking for the address of the 'most beautiful place in the world', it could very well be Nova Cesta 204 in Opatija, as this street number is carved into the stone plaque at the entrance to the American Gardens. Beyond this gate, there is a magnificent park, which has now been reopened to the public.

The American Gardens are located on the green slopes above the main road that connects Opatija with the coastal town of Lovran, and are just a five-minute walk from Slatina town beach. This is the place where the green hinterland, dominated by Mount Učka, the highest Istrian mountain, meets the blue sea of Kvarner Bay. The connection between the 'green and blue' is an attractive footbridge, which provides safe access to the American Gardens over the busy Nova Cesta road.

The path uphill to this masterpiece of park architecture passes a number of the town's attractions. This short but interesting route starts at the coastal promenade in the part of the town called Slatina, which features the Croatian Walk of Fame with the names of prominent Croatian athletes, scientists, writers and artists, and continues past a small square with a park and distinctive fountain opposite Slatina town beach.

The route continues uphill past Slatina Shopping Mall and the impressive Church of Our Lady of the Annunciation, built at the beginning of the 20th century according to the design of the famous Viennese architect Carl Seidl. The American Gardens are located just a few steps above the church and can be reached via a footbridge which offers a wonderful view of the town and the sea.