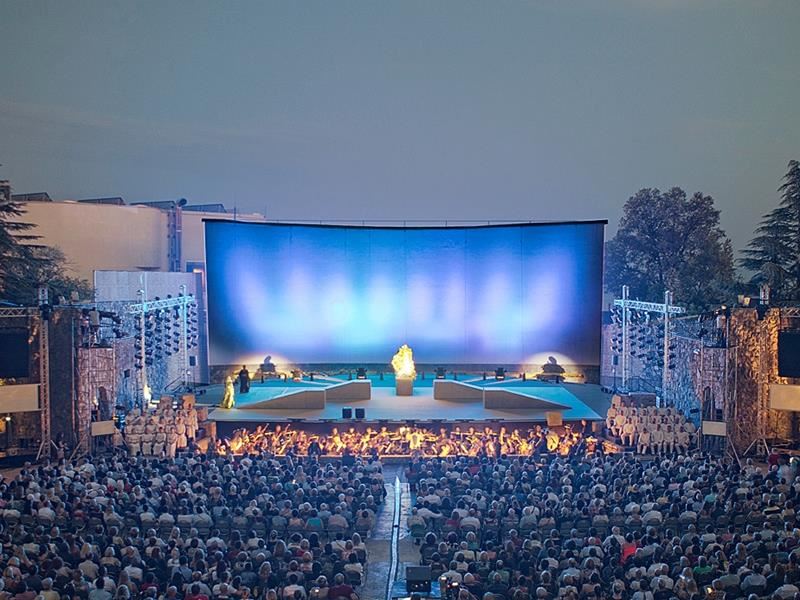 Opatija, this jewel of the Adriatic Sea, with its tradition in tourism of more than 160 years is one of the best known destinations in Croatia. Situated on the eastern rim of the Mediterranean basin, on the coast of the Kvarner Bay, at the foot of the Učka Mountain slopes - winding mildly down to the sea - with its climatic features, breath-taking architecture, fine hotels, manicured parks and promenades, Opatija offers its visitors an excellent opportunity for a pleasant stay all year round.

To make your stay in Opatija filled with exquisite entertainment is the task of the Festival Opatija, an organization instituted by the City of Opatija for the purpose of enhancing the cultural life of its citizens, guests and visitors, that was also entrusted with managing the Open Air Theatre.

The Open Air Theatre is situated on the green "peninsula" of the well-known Opatija’s “Angiolina Park”, right by the sea. This unique location and its ambiance created by the combination of stone walls and greenery make it the most spectacular and the most beautiful venue of this kind in the Mediterranean. The main stage area can seat 2500, or alternatively offer 5000 standing places, and with the stage of 21x12 meters it is an ideal spot for all kinds of performances, be it music, play or combined art forms, from the classical opera, operetta, ballet and musicals, across contemporary jazz, pop, and rock concerts to many other social happenings of various kinds. The small stage area can seat 600 and with its stage that measures 10x10 meters, apart from being the "little big stage", it gives the audience a much more intimate feeling with a bigger cohesion and interaction among those present. It is ideal for staging smaller formats of dramatic and musical performances. The location where the Open Air Theatre stands today was originally intended for a much more ambitious project at the beginning of the 20th century - a multipurpose health resort palace (Kurpalast), for which there was a public tender inviting for architectural bids in 1911. The architects Marcel Kammerer, Otto Schönthal and Emil Hoppe drafted a blueprint of a palace with ballrooms for balls and concerts, swimming pool with artificial waves, shops and cafés. Unfortunately, the onset of the World War I disrupted this splendid development of Opatija. After the war was over, by the Treaty of Rapallo from 1920, Istria - with Opatija included - came under the Italian rule and instead of a health resort palace, the Open Air Theatre was built.

It obtained its present form according to the project by the famous Croatian architect, Neven Šegvić, in 1957. Since then, it has been hosting operas, ballets, symphony orchestras, folk-dance performances, concerts and plays.
Festival Opatija never forgets the fact that Opatija, by its tradition and history, has always been the city of festivals and grand happenings.

In 1934, the most famous operatic tenor of his time, Beniamino Gigli, held his concert at the Open Air Theatre.
In 1935, the first international operetta festival, dedicated to the works of Franz Lehar was held there, too.
In 1958, in the close proximity of the Open Air Theatre, in Hotel Kvarner, the first Opatija Festival of Contemporary Light Music was held, soon to become the dominant promoter of popular music that was wholeheartedly embraced by both the audience and the popular-music scene, with the iconic Ivo Robić taking the leading role.

In the period from 1985 onward, the Open Air Theatre of Opatija has been carrying on its tradition of hosting major musical events:

In 2011, the first Musical Festival was held at the Open Air Theatre. Musical, as the most popular form of performing arts today, is a logical continuation of the rich after-war tradition of Opatija festivals of popular music and it carries on this series of festivals.

The venue of the Open Air Theatre can be rented for an appropriate event in the time slots when nothing is scheduled to happen by the Festival Opatija itself, and in such cases this institution also renders complete service of logistical support to the renter.